Vandurgi is always presenting news on on going aspects of Agarwood industry for the benefits of our farmers, suplyers  and associates. Agarwood is called “Gaharu” in the local language of Malaysia. The names Karas, Tabak, Kendan, Kepung and Deppu are prevalent. Agarwood farming has been extensively expandeding in this country, and the gardens here look like peninsula. Agar cultivation was prevalent in the country during the 19th century. According to a major press release from Spanish, 1548, large-scale brokers, such as diamond, camphor, and agarwood brokers, were stayed here and shipped the pieces of agar wood to Singapore and major buyer’s countries. In recent years, many private companies have undertaken large scale agar farming. Soil selection is important in agar farming. Agarwood does not grow anywhere. Climate should be good since it is a forest species. Wild clay fields are suitable and clay fields are not suitable. Soft sandy soils, mixed soil, lowland and rocky mixed land, red stone mixed soils are fine. The place where the water stops is not suitable. Farmers here say the slope land is good.

Inoculation has taken place naturally in the forests of Malaysia. Agar is being developed with the help of fungus that help in the production of resin from broken agar trees, animals or insect-attacked trees, and forest fires. In the recent years the industry is getting the results in 12 to 36 months by drilling holes in the tree trunk. During the processing, the cuttings of the agar trees pieces into infected and not infected part are separated by graded as per color such as black, brown, and light yellow to meet the market standards. The best agar parts are medically used in oil, mediums, tablets and medicine powders. Agar is also used in many ways, such as idol carving, japa mani and so on. 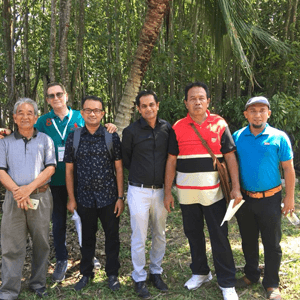 A specialty is Agar Tea, Gaharu Tea, oud Tea, is also one of the product developed by several enterprises here. Agarwood shoot leaves are cut, dried and processed into agar tea powder. Agar tea is so delicious which has medicinal properties. Medical oil research confirms that agar green tea has great health benefits.When checking various types of inoculation, in some plantations are well tolerated, while in some plantation the trees do not respond to inoculation, breakdown of inoculated trees, hollow trees, damaged from fungus etc drawbacks are seen. Growers are of the opinion that these are common in inoculation. Therefore, trees cutting, inoculation, reintroduction etc. in their plantations is constantly underway. Some growers only inoculate older trees so that in next few years they get with quality Agarwood.

In some places, naturally drilling worms make holes for the agar trees, where the agar naturally spreads. Even in such places, artificial inoculation will continue. Agar growing countries like Malaysia, Indonesia and also in our country’s Assam region, a species leaf – eating worms are seen. These worms need to be sprayed with insecticide to avoid the leaf and shoots of the tree.  As per the words of Malyshian prime minister, Agarwood’s contribution to the Malaysian economy is immense, with industry, university and country agar farmers advocating for the country’s development by working diligently and Agarwood, will be one of the source of revenue.